Message from the Founder

Gerard Manley Hopkins is an extraordinary English poet. Relatively unknown in his Victorian lifetime, and for thirty years after his death in 1889, he suddenly leapt into fame with the publication of his poems by the Oxford University Press in 1918, even more so in their second edition of 1930, and above all in their third and fourth editions after World War II. Now as a modern poet he is placed on a higher pedestal than any of his Victorian poetic predecessors and ranked even with John Milton and William Shakespeare. His fame extends not only to America and Ireland, where he is more highly esteemed than in his native England, according to the saying that “No man is a prophet in his own country”, but even to Japan, where we are proud to have two branches of a Hopkins Society, each with its own journal, “Hopkins Research” for the Kanto and “Nondum” for the Kansai. Back in England the University of Cambridge has fostered many Japanese students of Hopkins, in Ireland Japan is represented at annual conferences devoted to Hopkins at Monasterevin, and in America at such conferences in Denver, Colorado. Here in Japan, too, all those with interests in English poetry and poetics, as well as more broadly in English literature, are welcome to join us. Irasshaimase! Peter Milward SJ 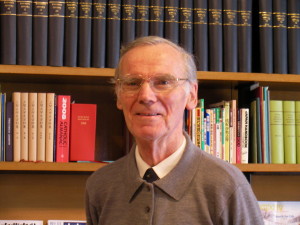